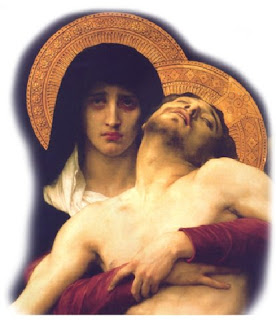 In the past few years as my faith has strengthened, God has made Lent increasingly jarring. This year it started early; Advent was a precursor of penitential days to come. At the women’s retreat in December, God sent me an intense realization of my distance from Him, and a longing so strong it was like mourning. In Weight of Glory, CS Lewis describes this experience: “The sense that in this universe we are treated as strangers, the longing to be acknowledged, to meet with some response, to bridge some chasm that yawns between us and reality, is part of our inconsolable secret.”
One tool of God’s furious love (as Fr. Lucas called it) was to have me give my testimony during Lent. Remembering all the damage I have done throughout the years and then admitting it out loud to a room full of people woke me to how grateful I should be for God’s rescue, and how very far I still need to go. The contrast between my works of devastation and his works of restoration and healing was laid bare.
During this time God also blessed me with glimpses of his divine love and the beauty and mystery and power of his creation. He awakened the stirrings of spring in my heart. Lewis says “We want something else which can hardly be put into words—to be united with the beauty we see, to pass into it, to receive it into ourselves, to bathe in it, to become part of it.”
He gave me visions of his love, and then showed me how very little I deserve such a gift. I have had to face my selfishness, my disobedience, and my lack of charity and prudence.
Bishop Fulton Sheen said that God looks at us the way a mother looks upon the dirty face of her child, and sees the divine image shining from it. What a lovely, lovely contemplation. And while I believe that I have been made in the image and likeness of God as Fr. Robert reminds us, it seems my face will never be clean enough to gaze upon the glory of Christ.
Peter Kreeft says that we are like the crippled man by the pool of Siloam. We want to get into the water to be healed, but we can’t get into the water because we are not healed. We need to be holy, we can’t be holy. We need to be just, we can’t be just. We need to be like Christ, we can’t be like Christ.
As sojourners in this time and place, we are caught between the promise of his love, mercy, and forgiveness, and the reality of our unworthiness. We can’t see how the two can ever be reconciled. (Or at least I can’t. I pray that you can.)
And now Holy Week is here. The week in which God himself will wash my feet (my feet!), will sweat blood alone in the garden while I sleep, will be scourged while I huddle near the warmth of a fire, will be nailed to a cross while I hide from the realization of how it feels to betray, and finally, will die in agony while I whine about my puny crosses. I enter Holy Week feeling a worm and not a woman, unworthy of his slightest thought let alone the bountiful blessing and trust he has poured out.
The burden of my ingratitude is heavy.
But even as I write during these dark final days when we move from “Hosanna!” to “Crucify him!”, a glimmer of light shines. For on Sunday, despite having turned away from him over and over again, despite leaving him to suffer and die alone, on Sunday he renews our baptismal covenant with him. On Sunday our wedding vows are renewed and we become once again his bride, and he our spouse. And despite our many failings, our repeated betrayals, he comes to us in the eternal wedding feast; we receive him, and are received.
The Lenten journey is not just Christ’s, it is ours as well. And eventually our Easter will come.
The Lord is risen indeed! Alleluia!
at 4:21 PM