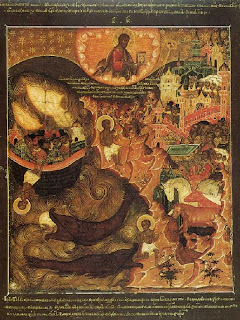 The special Old Testament reading for Ash Wednesday was Jonah 3:1-4:11. A subset of the text is here:
3:1 The word of the LORD came to Jonah a second time: 2 "Set out for the great city of Nineveh, and announce to it the message that I will tell you." 3 So Jonah made ready and went to Nineveh, according to the LORD'S bidding. Now Nineveh was an enormously large city; it took three days to go through it. 4 Jonah began his journey through the city, and had gone but a single day's walk announcing, "Forty days more and Nineveh shall be destroyed," 5 when the people of Nineveh believed God; they proclaimed a fast and all of them, great and small, put on sackcloth. 6 When the news reached the king of Nineveh, he rose from his throne, laid aside his robe, covered himself with sackcloth, and sat in the ashes. 7 Then he had this proclaimed throughout Nineveh, by decree of the king and his nobles: "Neither man nor beast, neither cattle nor sheep, shall taste anything; they shall not eat, nor shall they drink water. 8 Man and beast shall be covered with sackcloth and call loudly to God; every man shall turn from his evil way and from the violence he has in hand. 9 Who knows, God may relent and forgive, and withhold his blazing wrath, so that we shall not perish." 10 When God saw by their actions how they turned from their evil way, he repented of the evil that he had threatened to do to them; he did not carry it out.
4:1 But this was greatly displeasing to Jonah, and he became angry. 2 "I beseech you, LORD," he prayed, "is not this what I said while I was still in my own country? This is why I fled at first to Tarshish. I knew that you are a gracious and merciful God, slow to anger, rich in clemency, loathe to punish. 3 And now, LORD, please take my life from me; for it is better for me to die than to live." 4 But the LORD asked, "Have you reason to be angry?" 5 Jonah then left the city for a place to the east of it, where he built himself a hut and waited under it in the shade, to see what would happen to the city. 6 And when the LORD God provided a gourd plant, that grew up over Jonah's head, giving shade that relieved him of any discomfort, Jonah was very happy over the plant. 7 But the next morning at dawn God sent a worm which attacked the plant, so that it withered. 8 And when the sun arose, God sent a burning east wind; and the sun beat upon Jonah's head till he became faint. Then he asked for death, saying, "I would be better off dead than alive." 9 But God said to Jonah, "Have you reason to be angry over the plant?" "I have reason to be angry," Jonah answered, "angry enough to die." 10 Then the LORD said, "You are concerned over the plant which cost you no labor and which you did not raise; it came up in one night and in one night it perished. 11 And should I not be concerned over Nineveh, the great city, in which there are more than a hundred and twenty thousand persons who cannot distinguish their right hand from their left, not to mention the many cattle?"
I found it very comforting to see how God will use us even when we begrudge His requests. Jonah was angry that God did not work the way he wanted Him to work. Jonah had gone through the trial of resisting God’s will and experienced God’s less-than-subtle correction before submitting and going to warn Nineveh of it’s impending doom. And what does God do in response? He changes His mind and pardons the city.
Jonah went off in a royal huff. He’d done what God wanted, so why didn’t God follow through?
It sounds just like me.
I try to be a just and righteous disciple, but sometimes submit only with sulking and scuffling when God’s plan for me doesn’t line up with what I think His plan should be.
In reality, the plan for Nineveh goes exactly as He has arranged. The people repent and are saved. That was God’s intention in sending Jonah all along. It was Jonah’s perspective that was wrong. But despite Jonah’s peevishness and childish resentment, God sent a sign of His love. A miraculous sign of His attention to our minor comforts, our human, physical need. He does the same for me; following up on my own petty responses with love, with miraculous attention, with the touch of His revelation. For a moment I am comforted, as Jonah was. But that quickly transforms into a lackadaisical acceptance and normalization of the incredible. So the vine dies and the gift of comfort is withdrawn. For a season.
God said, “Is it right to be angry?” Jonah replied, “Yes, angry enough to die!”
Lord help me learn from this story. Stop me from answering as Jonah did. Help me to be thankful for the bush, the shade, your many gifts and comforts. Help me to be grateful. Amen.
at 4:06 PM