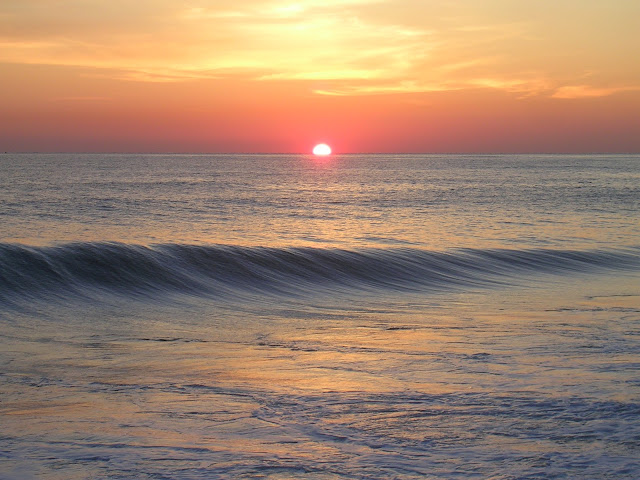 Another Holy Spirit moment from my recent trip. Both DiDi and I have family in the area that we visited, and so our week was broken up between relaxation together and time with mothers and sisters and neices and nephews of every size. I had not been to an ocean in years, and so one of our goals was to spend some time on the beach. Our flight home was not scheduled till late afternoon, and so on that day we packed up all our gear and decided to go for one last hour or two at a beach before heading to the airport.
It was beautiful, and turning away was hard. So hard in fact, that we ended up staying later than we should, and our frantic drive to the airport included a bit of hysterics on my part along with much rushing and hustling and scrambling. I've struggled lately with time, and have repeatedly underestimated times I've expected to get back from the grocery store, or from church, or from this or that event. Returning home an entire day late really would have been the icing on my cake of lateness. I was wracked with guilt. DiDi would undoubtedly say I was overboard with it. (Might have had something to do with the farewell wine I'd consumed. But that's another tale for another day.)
We eventually arrived and rushed up to the desk to check our bags and check in. I looked a sight; all mascara-smeared cheeks, wind-tangled hair, and reined-in hysteria. The two airline reps looked at eachother and muttered "These must be the ones." They knew we were rushing, knew the flight we must be looking for, and also knew the connection we needed to make. They were bracing for the conversation that was about to take place. "You DO know that your flight has been delayed, don't you?", the closest one said. My jaw literally dropped to my chest. I was saved. Somehow, I had been saved. But looking at them, I could tell there was more they had to say. The rep braced herself again, then informed us that the next flight out would be too late to make our connection back home. We could not leave until the following day.
Not only was I saved from being my usual, lame, late self, I was also given an extra day with no familial obligations and nothing to do but relax with my closest, dearest, and most beloved friend. I gaped a slack-jawed gape at DiDi, and saw that she was wearing the smug look she reserves for occasions when our Lord does something fantastic and stunning that knocks me sideways. The look that says "Yeah, that's MY God. You know it. Mmm Hmm." All casual while simultaneously bursting with pride.
The airline reps, beleaguered from having to give bad news to customer after customer all afternoon, looked bewildered and one of them asked: "You're happy about this???" DiDi, being the cool chick that she is, God's comrade, Daughter of Thunder, calmly tossed back "Answered prayer."
So that's the story of how I got to stay another day, to drive a convertible back toward the beach, to eat a lovely, relaxed meal in a nice restaurant, and to huddle wrapped in a blanket with the friend of my heart watching the sun come up over the ocean.
Imagine: the maker of that sun and that ocean and that incredible miraculous sand, desired to give -me- these gifts. Yep. That's MY God.
at 6:00 AM

what a mighty,giving and loving God we have indeed!

wait, did you sleep on the beach??

P-mama: nope, we just got up early and scrambled to make it by sun up. We stayed close to the beach for that purpose.