Open Both Hands to Receive My Blessing... 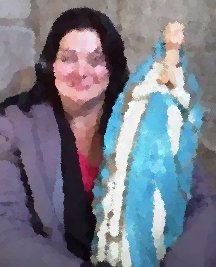 I've been doing a lot of thinking, praying, and complaining about intolerance lately, as can be seen by recent posts.

My heart hurts for all the souls to which investigation of Christ's mysteries is closed, the door of the mind slammed shut, locked, and barred.

During these weeks I have tried to be His hand, knocking.

I'm sure I go about it the wrong way much of the time. But our God is such a lover that He rewards even the fumbled attempts. Here's how He rewarded me yesterday.

DiDi and I went to mass at the local Episcopal church, where the Holy Spirit is tangible, the music excellent, the preaching very good, and community and outreach are a central focus. (In other words, all of the things we've had a hard time finding in the nearby Catholic churches.) A time for healing prayer was offered before the Eucharist, with several pray-ers positioned near the altar. Neither of us felt led to go forward and request prayer, and so we sat in the pew, listening to the music and praying. As the time drew to an end, I started feeling the urge to ask Diane to go up and ask for prayer for her knee, not for her sake, but for the sake of the ministry. I told her it was not a burning need, but that I knew I should pass it along.

The healing ministry concluded and the service moved on. DiDi leaned over to thank me for telling her, and said to open my hands; that I would be blessed for my obedience in delivering the message. (He also convicted her about speaking to the minister afterward, which she did. But that is DiDi's story to tell.)

As the service continued, I prayed that my heart would be opened to anything our Lord wanted to give me.

We stayed for coffee hour, and chatted with a few people before beginning a conversation with one of the priests. Rev. Ollie is an easy conversationalist with a wide breadth of knowledge and a gift of encouragement. We mentioned our frustration with the level of fear that manifested when discussing issues faith from a catholic perspective. We described how the fear and discomfort reached a pinnacle when the topic was Mary.

Rev. Ollie's eyebrows shot up, and for a moment he looked like a young boy with a secret he couldn't wait to share. His eyes sparkled as he revealed it. Just that week they'd received a phone call from someone  trying to find a church to adopt a statue of Mary. None of the Roman Catholic parishes had accepted the offer, and so this church said yes. They took her in as an act of mercy, but had no idea what they were going to do with her. They aren't a church that really "does" Mary images.

He led us to a side room where she sat on a wide window ledge; a painted plaster statue about two feet in height.

And then Rev. Ollie said "Would you like her?"

I had to pick her up with two hands, and carry her in both arms. She is a bit heavy.

Mary now sits in the living room, waiting for a gentle cleaning. She is not the first Mary image in this home. From where I sit typing I can see five. (I'm a bit of a collector.) But she is the largest. And she is the first which I needed to open both hands to receive.

Sometimes His affirmations are soft and subtle, requiring you to lean in with heart and mind in order to recognize them. And sometimes they are so obvious that they need their own seat belt.

Thank you Lord, for your Mother, and for your love of those who seek to honor her. I receive her with open arms.
at 10:41 AM