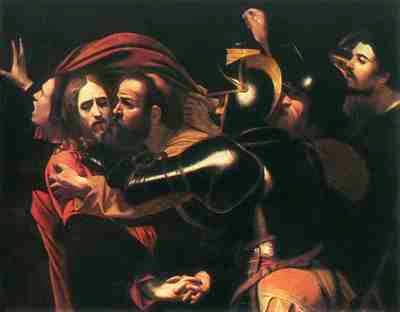 On Wednesday of this most holy week, I was asked to give the homily for an evening prayer service. It was my first time in the role. Here is what I offered, complete with opening and closing prayers.

O Lord, open our eyes
To behold your presence.
Open our ears
To hear your voice.
Open our hearts
To receive your love.
That our mouths may proclaim your praise. Amen.

I’m going to focus on the gospel passage (John 13:21-32), and so we’re going to talk a little bit about who Judas was and how Jesus related to him, and then we’ll dive into the drama that unfolds in the reading.

It is a dark story, in a dark week, which finally erupts into a great light.

So what do we know about Judas?

He was chosen as one of the original 12 apostles, and keeper of the purse. He did at least some good works, like feeding the poor. He was given the authority to cast out demons and heal the sick. He went out to proclaim the good news.

In other words, he was an apostle like all the others. But, he was a thief.

And what do we know about Jesus’ relationship with Judas?

First, that Jesus wanted him from the beginning.
He went up the mountain and called to him those whom he wanted, and they came to him. (Mark 3:13)

Jesus knew the reality of who Judas was; he wasn’t hoodwinked.
For Jesus knew from the first … the one that would betray him. (John 6:64)

But Jesus sorrows over this knowledge. John tells us that Jesus was troubled in spirit, and declared, “Very truly, I tell you, one of you will betray me.” He uses the same phrasing when talking about the death of his good friend Lazarus, so he must have been troubled indeed.

Matthew tells us that Jesus calls Judas friend at the very moment of his final betrayal, standing in the garden of Gethsemane, saying:
“Friend, do what you are here to do.” (Matt 26:50)

But Jesus never stopped loving Judas.
Having loved his own who were in the world, he loved them to the end. (John 13:1)

The betrayal begins to unfold during the last supper.

Maundy Thursday is one of the highest holy days in the church calendar because out of it came the institution of both the priesthood and the Eucharist.  Jesus orchestrated the celebration, and acted as the Passover feast’s host. In the tradition of the time, the host had certain duties and privileges. On that Thursday, Jesus stripped down and washed the apostles’ feet, which was the action of a servant, not of a host.

He then offers up the first Eucharist, presenting his own flesh and blood for the first time in the form of bread and wine.

He’d positioned Judas close by, in a place of honor, where they might eat together from the same bowl. In our gospel passage Jesus says:
“It is the one to whom I give this piece of bread when I have dipped it in the dish.” So when he had dipped the piece of bread, he gave it to Judas son of Simon Iscariot. (John 13: 26)

In an Eastern custom that is still in practice, a “sop” is offered to the most honored guest. The sop is the tastiest morsel of food tucked into a bit of bread, or a piece of bread dipped in the most delicious pool of lamb juices in the communal bowl.

I imagine him dipping the bread into the cup of his blood, the wine.

Jesus followed this tradition, and offered the “sop” to Judas. Singling HIM out as the most honored guest.

Isn’t that amazing, knowing what he did?

In this same tradition, the sop is offered before anyone else begins to eat. It is sometimes delivered directly to the guest’s mouth.

And so if we put together all the various gospel accounts along with an understanding of this practice, we discover that Jesus offered up his body and blood, for the first time ever, to Judas.

Judas, who he chose and who he loves and for whom he willingly suffers all that is to come.

Judas: the first recipient of the first Eucharist.

Jesus then tells him to go quickly, and do what he has to do. So Judas immediately gets up from Jesus’ side, and leaves.

The story ends with the phrase:
And it was night.

Matthew tells us when Judas hears that Jesus was condemned, he repents. He returns the 30 pieces of silver and is overcome with guilt and remorse.

Judas surely did receive the full force of that woe. He experienced it so completely that he committed suicide.

It is said that Jesus is the bearer of all our sins. The last thing I want to be is heretical, but in a way, isn’t that really what Judas did? He took all our sinful tendencies into his own hands and brought about the worst imaginable sin; the killing of God?

Poor Judas bore the weight of all the betrayals that have taken place since Adam's, and all those we'll continue to inflict until the end of time. And aren’t we really both of these scapegoat characters?

Admit it; we would bite that irresistible apple if a snake told us to, just like Adam did. And like Judas we turn our backs on Jesus in our own lives. Perhaps not as spectacularly, but possibly more frequently.

We deny him as Peter did, and leave him alone as the rest of the disciples did, and we take the bread that Jesus dips and kiss him while offering him up to our own selfishness.

Haven’t we all been betrayers? Jesus tells us that what we do to the least of his children, we do to him. Haven’t we all done things to his children for which we feel remorse and sorrow? Sometimes even to the point of wishing we were dead?

I know I have. I pray that I never will again, but it’s possible that smaller betrayals are part of my future.

The story of Judas is difficult. But thankfully the news, though sad, is good. Because in describing his relationship with Judas, Jesus tells us he knew US from the beginning. He knows all the evil we’ve done in the past, and all our temptations in the future.

And yet he washes our feet.
And he feeds us spiritual food, lifting his own hand to our mouths.
And he calls us friend at the very moment we disown him.
And he waits for us to repent, and then pulls us into the circle of the heavenly kingdom where we will join the twelve in the perpetual wedding feast of the lamb.

Lord Jesus Christ, we thank you for the fathomless depths of your love. Have mercy on the soul of the one who betrayed you then, and on those of us who continue to betray you now.
In your name we pray. Amen.
at 1:28 PM

Thank God for His compassion.